ITA vs SPAIN: regional vs local

Mark Weisbrot: How the ECB came to control the fate of the world economy

Near-bankrupt Greece is fast running out of cash while it waits for its next installment of aid from international lenders, a deputy finance minister said on Tuesday, sounding the alarm on the country's precarious financial position.
Greece's European partners have repeatedly promised the country will be funded through August, when it must repay a 3.2 billion euro bond, but the details of the funding have yet to be disclosed.
In the absence of that money, Greece would run out of funds to pay everyday public expenses ranging from police and other public service wages to pensions and social benefits.
The country is wholly reliant on aid from its European partners and the International Monetary Fund, who have turned up the pressure in recent weeks by withholding further aid until an assesment of Greece's compliance with reforms is complete.
"Cash reserves are almost zero. It is risky to say until when (they will last) as it always depends on the budget execution, revenues and expenditure," Deputy Finance Minister Christos Staikouras told state NET television.
"But we are certainly on the brink, we did not receive the aid tranche we were supposed to and we have the pending issue of an ECB bond maturing on Aug. 20."
Greece has narrowly dodged bankruptcy several times before, with the government carrying out a juggling act of holding off on paying some suppliers and issuing T-bills until the next tranche of aid from lenders arrives.
The assessment of Greece's progress in meeting the terms of its bailout by EU/IMF inspectors, who are currently on a visit to Athens, is not expected until September.
Adding to the uncertainty, Greek political leaders have been wrangling over 11.5 billion euros of cuts that are crucial to appeasing the lenders.

© Dow Jones Newswires
Posted by geokalp at 12:30 No comments:

© Dow Jones Newswires
Posted by geokalp at 12:28 No comments:

© Dow Jones Newswires
Posted by geokalp at 12:27 No comments:

© Dow Jones Newswires
Posted by geokalp at 12:26 No comments: 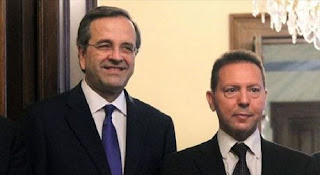